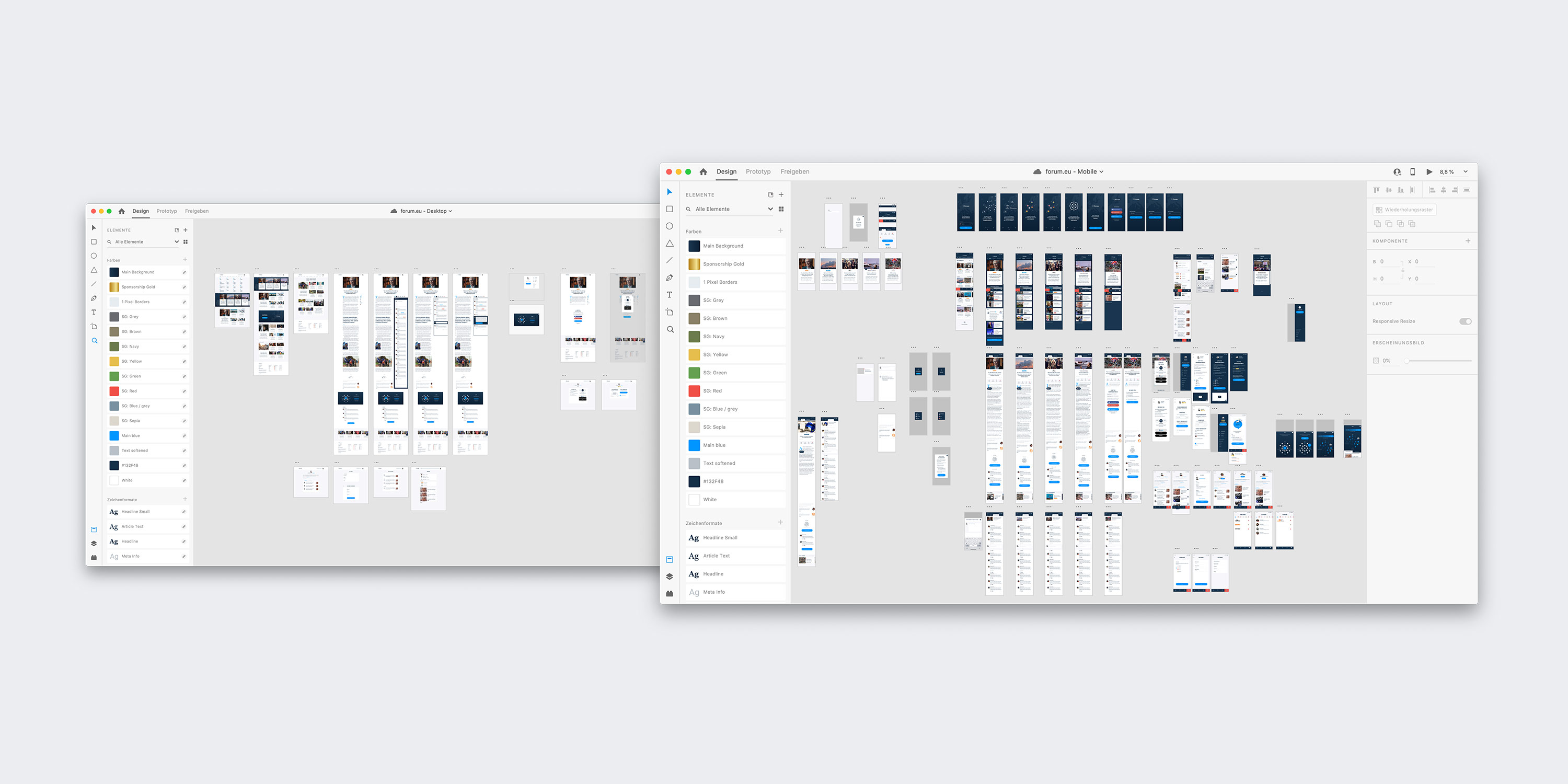 forum.eu curates articles on Europe from leading publishers and translates these articles into multiple languages in order to make them accessible to the European public. The founders approached me as they were looking for a UX designer who could turn their ideas into something tangible.

There were just a few rough ideas and a logo available from an agency. So at the beginning, we defined the scope and features and narrowed down the Minimal Viable Product in several ideation sessions with the founders. One key aspect we agreed on early was to think mobile first.

Developing a clickable prototype with exemplary content, that can be used on smartphones to test and validate hypotheses. The development of a desktop version followed later.

User testing – to make the app as user-friendly as possible and validate hypotheses on our feature set. For example in cafés and co-working spaces. Simply by asking people to use the app on our phone and asking questions. The insights were used to iterate on the prototype.

Briefing the developers by creating user stories and acceptance criterias. Providing feedback on the progress until beta rollout.

The aim of forum.eu is to solve the challenge, that “Europe’s democratic deficit can only be solved, when a European public sphere emerges” (Jürgen Habermas). Lot’s of Europeans have no access to qualitative journalism or different opinions outside their country. Do people in Britain know what the French think about the Brexit? Or do the people of Poland know the Greek opinion on migration?

For that purpose, forum.eu will provide a service, an app and a website version, where they curate the best articles on Europe from leading publishers and translate these articles into multiple European languages.

In July 2019 I got to know the core team of forum.eu. In several ideation sessions with Nikolaus and Valentin, two of the founders, we defined the process and narrowed down the MVP (Minimal Viable Product). An important aspect we agreed on early was not to develop only a website, but also an app – and thus to think mobile first in particular.

From then on, we iteratively developed a clickable mobile prototype with exemplary content. We used this prototype for usability testing, which we conducted in cafes and co-working spaces – simply by asking people to use the app on our phone. 90% of the people we asked said „yes, of course“ and gave us honest feedback. Thereby we gained lots of insights that were extremely helpful and we could use to adapt the prototype.

Example: We thought that by using the app, the purpose becomes clear. But that was not the case. Many users did not understand it after we asked them. So we added a short „onboarding“ and the next usability tests gets much better.

As a tool we used Adobe XD, which is ideal for developing app prototypes that can be tested directly on mobile devices. Even advanced navigation concepts like swiping can be implemented. Another benefit of Adobe XD is, that you can share the files with developers so they can inspect the CSS specifications.

After we agreed on the visual concept and the set of features, we started with the implementation. The developers decided to use REACT and Cordova to wrap it into an app. It is still in progress and we are all excited to see it live.